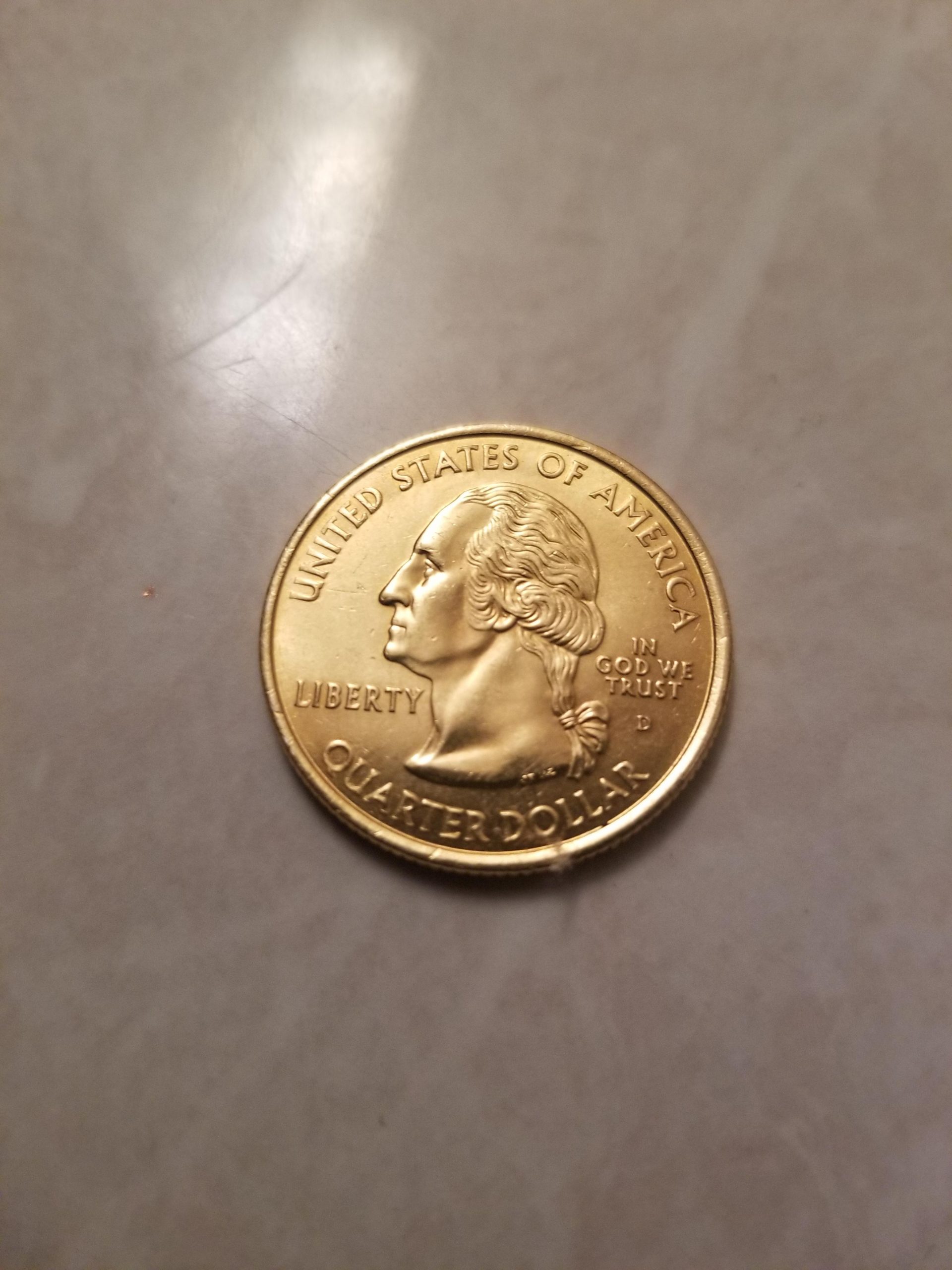 What Is A Gold Quarter Worth? 2021 Update + Price History | Gold IRA Guide

A gold coin isn’t necessarily worth its weight in gold. There are many plated gold quarters that are worth no more than a standard 25-cent U.S.-minted quarter. Although these coins contain a thin layer of gold—usually about 0.003 inches thick—they’re virtually impossible to resell because they have little to no melt value.

A genuine gold quarter, however, is worth a pretty penny. If you’re a lucky owner of one of the 91,752 government-issued gold quarters in existence, you’ve got a resellable collector’s item that’s worth far more than its face value.

Curious to know what your gold quarter is worth? Below, I’ve broken down the current market price of a gold quarter, analyze their price history, and comment on whether they’re a sound investment during periods of economic instability.

Gold quarters are relatively new inventions, but gold coins aren’t. In the United States, gold coins were first introduced with the passage of the Coinage Act of 1792. This statute led to the minting of a $10 coin (Eagle), a $5 coin (Half-eagle), and a $2.50 coin (Quarter-eagle). Gold quarters are not to be confused with Quarter-eagles, which are also made of gold but are worth considerably more.

In the 19th and 20th centuries, commemorative gold coins were issued periodically by the U.S. Mint, including the 1903 Louisiana Purchase Expo dollar, the 1916 McKinley Memorial dollar, and the 1922 Grant Memorial dollar.

By the late 20th-century, the collectors’ aftermarket for gold coinage grew such that the U.S. Mint began issuing coins not intended for circulation (NIFC). These commemorative gold and silver coins were issued purely for collectors’ markets and include such rare coins as the 2014 National Baseball Hall of Fame and Museum coin ($5 face value) and the 2000 Library of Congress bimetallic eagle ($10 face value).

The only officially sanctioned gold quarter to ever enter circulation is the Standing Liberty Centennial Gold Coin, issued in 2016, with a 99.99% 24 karat gold composition and a face value of 25 cents. The coin weighs 0.25 troy ounces and features a “W” hallmark on its obverse side in reference to its minting location in West Point, New York. Only 91,752 Standing Liberty Centennial quarters have ever been produced by the U.S. Mint.

The aftermarket value of a Standing Liberty Centennial gold quarter is derived from its melt value which, in turn, derives from the current spot price of gold. Given that the coin contains 0.25 ounces of gold, its resale value is approximately one-quarter of the price of a one-ounce gold bullion bar.

However, this assumes that the coin has a sharp strike with a full original luster but up to two or three noticeable contact marks (MS-66/67). A gold quarter in “perfect uncirculated” mint state (MS-70) without any wear, scratches, or contact with other coins as detected by 5x magnification can often sell for 15-25% more than its weight in gold.

To find the melt value of your gold coin, use our price of gold calculator. Our calculator uses up-to-the-minute data to calculate the market price of aftermarket gold based on its weight, purity, and bid price.

Since their original minting in 2016, gold quarter prices have fluctuated according to the spot price of gold bullion. Below, I’ve listed the year-end price history of MS-66/67 condition Standing Liberty Centennial Gold Coins for every year they have been in circulation:

Are Gold Quarters a Worthwhile Investment in 2021?

Gold quarters are an excellent portfolio diversifier and hedge against instability in the equities market. Earlier this month, the price of gold entered all-time high territory by breaking through the critical $2,000 per ounce resistance point. The question is whether gold can maintain its upward price movement.

The general sentiment among analysts and market-watchers is that gold’s bull run will continue through the next 12-to-18-month period. Mainstream forecasts put gold’s price ceiling between $2,300 (Goldman Sachs) and $3,000 (Bank of America) by Q4 2021. If true, a gold quarter would be worth $575 and $750, respectively.

Gold tends to perform well during times of relative instability and uncertainty. Investors flock to precious metals such as gold to flee the volatility of the stock market during bear markets and recessions, which have a history of retaining their value during economic downturns.

History proves that gold is indeed a smart investment for investors looking to hedge against systemic instability and market risk. Amid the economic instability brought about by the coronavirus (Covid-19) pandemic and widespread social unrest in the United States, risk-averse investors may want to consider diversifying their portfolio with a gold IRA or 401(k).

Gold-plated quarters aren’t valuable, but genuine gold quarters are worth several hundred dollars apiece. Their exact resale value depends on the spot price, which varies day by day. Since its inception in 2016, the Standing Liberty Centennial gold quarter has increased in value by 66.98% and has outperformed the U.S. stock market.

During times of instability such as these, investors should consider gold and gold quarters as a safe haven asset. To get started adding physical gold bullion to your investment portfolio, check out this comprehensive list of IRA-approved gold coins and bars.

The information provided here is not investment, tax or financial advice. You should consult with a licensed professional for advice concerning your specific situation.

Are you scared about the future of your wealth? You should be with all of the economic turmoil and political infighting…

People are fascinated by the appeal of gold since ancient times, and it can also play a significant role in people’s…