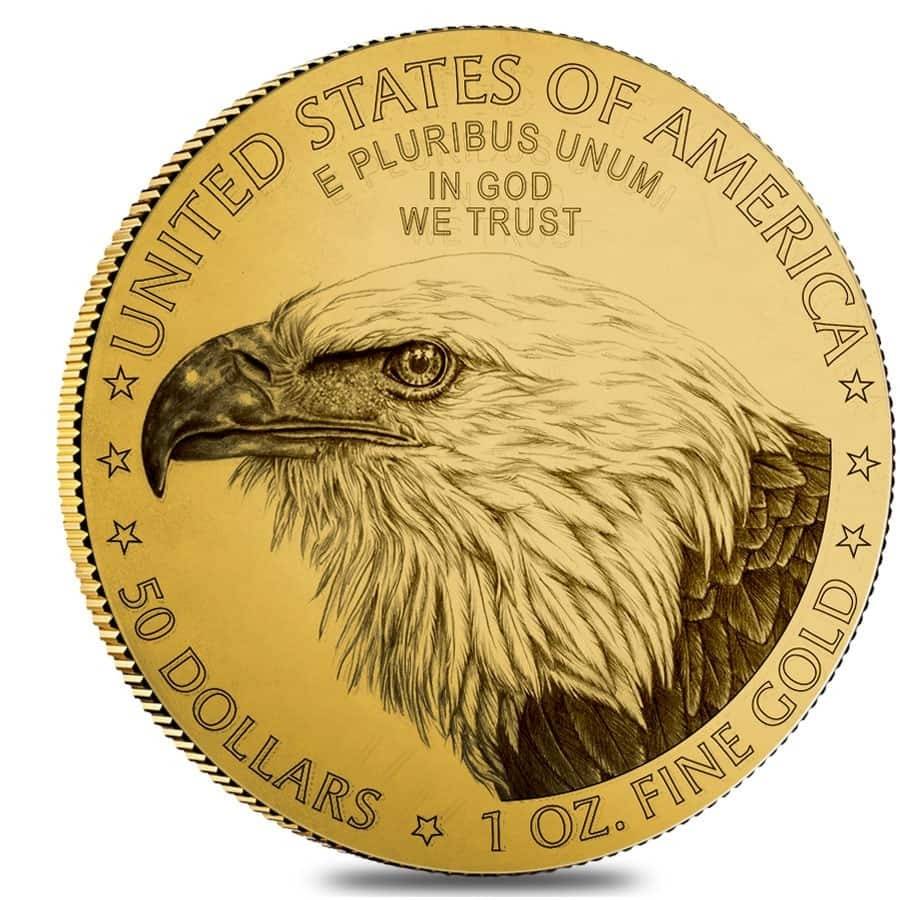 Last October the Mint unveiled the new, type 2 reverse that
will begin appearing on 2021 Gold Eagles around the middle of the year. This
design will be featured in 2021 on bullion coins, Proofs, burnished
uncirculated coins and some special issues including a two-coin $5, 1/10th
ounce set — the details of which have not yet been revealed.

Selected by then U.S. Treasury Secretary Stephen Mnuchin
last year after receiving recommendations from the Committee of Fine Arts and
the Citizens Coinage Advisory Committee, the new Gold Eagle reverse is a bold
design that represents a major change with how eagles have been depicted on
American coinage since the Mint’s founding in 1792.

Designed by Artistic Infusion Artist Jennie Norris, it
features a close-up profile of the head of a bald eagle facing left surrounded
by statutory inscriptions above it for UNITED STATES OF AMERICA, E PLURIBUS
UNUM AND IN GOD WE TRUST. Those inscriptions are separated by three stars on
each side of the eagle, and below them appear “50 DOLLARS,” and 1 OZ FINE GOLD.”

The eagle has a fierce gaze, and the design is rendered in
such detail that its beak and dense plumage look very realistic. The artist’s
ability to do that is related to her experience as a former raptor handler when
she was able to study the details of birds up close. She has noted that: “I
hoped to capture the intensity of his stare through the close cropping” of the
design.

Amazingly this is Norris’ first design for a U.S. Mint coin,
and it will continue to appear on Gold Eagles for at least the next 25 years as
required by an 1890 law, which is quite an amazing achievement for a new member
of the AIP program of outside artists who work with U.S. Mint artists.

Norris lives in Arizona, where she teaches art at the
University of Arizona, and is a specialist in fine art, graphic design and
illustration. Her main mediums are graphite and liquid graphite.

This design was sculpted by Renata Gordon, who has been a
U.S. Mint sculptor-engraver since 2010 when she graduated from the University
of the Arts in Philadelphia, which is where former Chief Engraver John Mercanti
studied. Though she has only so far designed the 2018 World War 1 centennial
silver medal for the Navy (which she also sculpted), she has sculpted many
coins, including commemoratives like the reverse of the Mark Twain silver
dollar, the reverse of the Betty Ford $10 First Spouse coin and several America
the Beautiful quarters, among many others.

The original, or type 1 reverse of the Gold Eagles, which
has appeared on the coin since 1986, is the creation of Texas artist Miley Busiek,
who now goes by Miley Tucker-Frost, and was sculpted by Sheril Joseph Winter,
who then served as a U.S. Mint sculptor-engraver. Coin sculptors are sometimes
overlooked despite the important role they play in creating the coins in your
hand.

When the artist heard the U.S. Mint was looking to create its
own gold bullion coins to compete with those from world mints, she though she
had the perfect eagle design for the reverse – one that would for the first
time depict not a single eagle, but a family of eagles. The design depicts a
male bald eagle carrying an olive branch back to a nest that is occupied by his
female companion and their hatchlings.

The backstory to this design is not well known even among
coin collectors. The design was the culmination of a 6-year journey for
Tucker-Frost that began when she heard Ronald Reagan’s acceptance speech at the
1980 Republican National Convention.

The speech discussed the idea of Americans coming together
like a family to work for the common good, which led the artist to the idea of depicting
a family of eagles that represented America as a caring family. The design that
came from that inspiration was turned into a sculpture that was later selected
by the Republican National Committee as the official commemorative for Reagan’s
first inaugural. President Reagan gave examples of the small sculpture as
gifts, including to the 52 former American hostages held in Iran.

Then after she learned of the upcoming program for an
American gold bullion coin, she began lobbying people in her state and in Washington,
DC, including members of congress, to support putting the design on the reverse
of the new gold coins.

When the legislation was written, it used very specific
language about the reverse design that basically described the artist’s design
but did not mention her by name, and it was later selected by then Treasury
Secretary James Baker. Baker also selected the famous, iconic design by
Augustus Saint-Gaudens that appeared on the $20 gold Double Eagle from 1907 to
1933 for the obverse design of the coin, which will remain the same.

This design was chosen for the $50, 1-ounce version but the
law did not require it be used on the three fractional sized coins, but it was
still chosen to appear on each of those as well.

Tucker-Frost, who now works mainly as a monumental sculpture
artist, considered the use of her design on such an important coin as a great
honor and has said that “The spirit behind the design was to honor our family
and America.” She also sees her design as representing hope for younger generations.

During the period over the last couple years when the Mint
was exploring using new designs on this coin, the artist told the press that
she opposed changing it because her design carried a message that is still
relevant. She added that if the Mint is concerned about the rise of counterfeit
coins, it should focus just on that aspect, which it is also doing with the new
design using both overt and covert security features.

Police has announced a GHS20,000 bounty for information that will lead to the arrest of the perpetrators of the bullion…