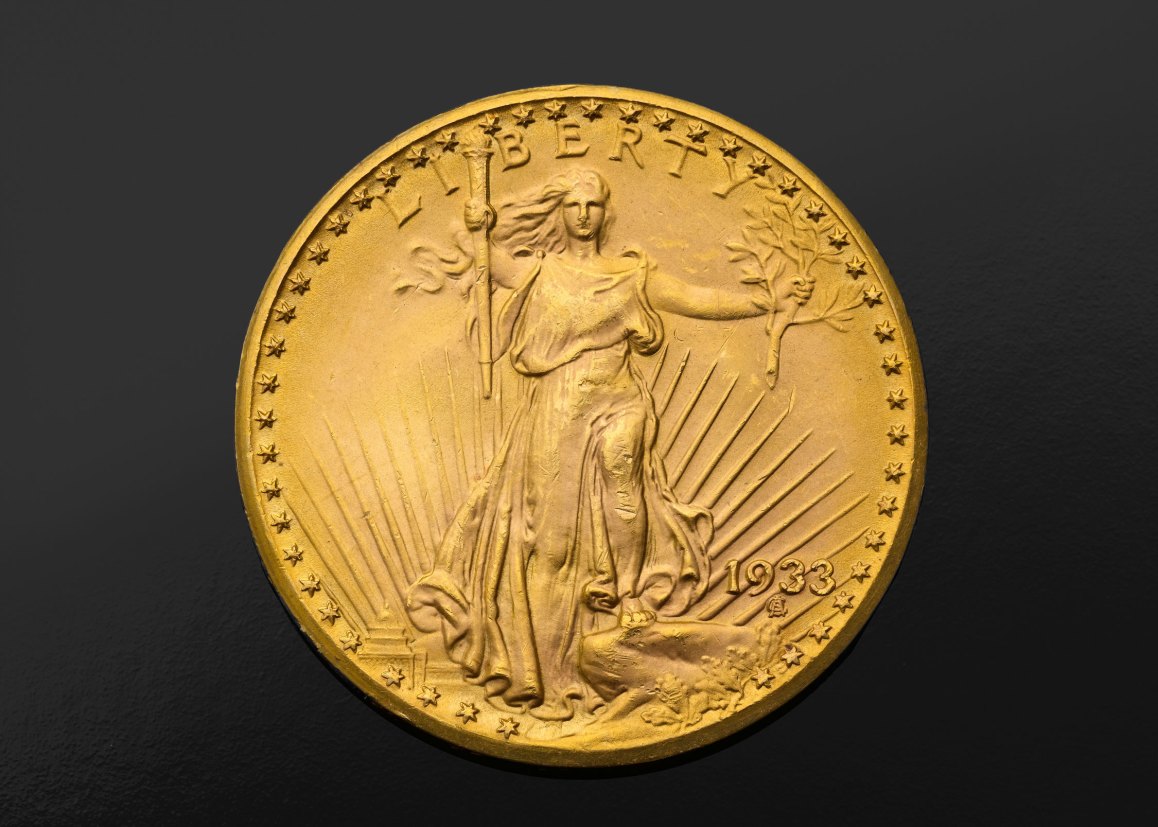 The Return of the 1933 Saint-Gaudens Double Eagle – Bullion Shark

A 1933 Saint-Gaudens double eagle — the last gold coin
struck with the beloved design of Augustus Saint-Gaudens widely considered the most beautiful American numismatic motif; the last gold coin of
any type issued before the U.S. went off the gold standard; and a coin that has
been shrouded in mystery for almost 90 years – will go on sale in June. This
will be only the second time this or any example of this notorious rare coin has been sold at a public auction.

The identity of the collector who purchased the coin on July
30, 2002 and who will sell it on June 8 has also been a mystery for two
decades.

Earlier this month he came forward, and his name is Stuart
A. Weitzman – a famous shoe designer and owner of a company he, his brother
Waren and father Seymour founded over 50 years ago. His footwear is worn by famous models and
actors.

As a child Weitzman collected stamps, building a modest
collection, and dreamed of owning the rarest stamps in the world – the unique
1856 One-Cent Magenta from British Guiana (the most valuable stamp in the
world) and a plate block of the 1918 inverted Jenny stamps that show an
airplane upside down, which was issued in error by the U.S. Postal Service. Though
there are also 96 individual examples of this stamp, there is just the one
plate block of four.

Weitzman, who is 79, eventually also purchased those
ultra-rare stamps. But because his adult children are not interested in owning
them and the 1933 double eagle after he passes away, he plans to sell the trio
of rare and famous collectibles in June. Proceeds will go towards several
charitable foundations founded by Weitzman and his family and a museum in Madrid,
Spain.

News of the upcoming sale of the 1933 Saint-Gaudens double
eagle has electrified the numismatic world and been the subject of mainstream
press coverage. The coin’s pre-sale estimated value is between $10 and $15
million, and the stamps are expected to bring another $20 million or so.

The coin has never been graded but experts who have seen it
say they would grade the coin MS65.

There are other super-rare coins that have sold at auction
in the $10 million range, and there are other coins in museums or private
collections that will probably never be publicly sold that are much rarer like
the 1870-S $3 gold coin or the 1849 $20 gold pattern piece. And there are coins
like the 1913 Liberty nickel that were never supposed to be made at all and
were struck surreptitiously by a Mint employee that are also rarer than the
1933 double eagle yet are legal to own.

Backstory to the famous coin

But none of those coins has origins or a history like those
of the 1933 Saint-Gaudens double eagle. And the one Weitzman owns is the only
example that is legal for a collector to purchase or own, and it is likely
there will be a very spirited competition on June 8 to purchase the coin that
could set a new world record.

Notably, in 2002 when Weitzman bought the Saint-Gaudens
double eagle it sold for $6.5 million plus buyer’s fee, brining the total to
$7,600,020 – the highest amount ever paid for a coin at the time. The extra $20
was necessary to monetize the coin, that is to make it legal tender since any
other examples of the coin, including two in the Smithsonian Institution’s
National Numismatic collection, are considered government property and illegal
for any private citizen to own.

In early 1933 the U.S. Mint struck 445,500 examples of that
year’s Saint-Gaudens double eagle, but all of them were supposed to have been
melted down later following the famous Executive Order newly inaugurated
President Franklin D. Roosevelt issued that made it illegal to own gold coins
or gold bullion except for $100 face value or coins with numismatic value.

A couple dozen of those coins somehow escaped the Mint likely
through the efforts of Mint cashier George McCann and Philadelphia jeweler
Israel “Izzy” Switt, who died in 1990 and is believed to have sold most of
those coins to coin dealers. In the 1930s and 1940s about 20 examples traded
quietly in the market, but following a 1944 Secret Service investigation, all
of them were determined to have entered the market illegally and were later recovered
and melted.

Another 10 of the coins would be discovered in 2004 by the
descendants of Mr. Switt in a safety deposit box and were later seized by the
government. Following over a decade of legal battles that went all the way to
the Supreme Court, the coins remain government property and are stored at Fort
Knox. There is another one that was surrendered anonymously in 2018 and could
be others out there.

However, one example received an export license to leave the
country – a coin that was purchased for the collection of King Farouk of Egypt
in 1944. That coin was supposed to be sold in 1954 after Farouk was deposed in
a coup, but when the U.S. government learned of the sale, the coin disappeared,
only to resurface more than 40 years later when a British coin dealer, Stephen
Fenton, tried to sell the coin.

Fenton was caught in an FBI sting operation and surrendered
the coin to the government, but rather than prosecute him, the government eventually
made an unusual legal settlement with him in which the coin would be sold at
auction in 2002 to Weitzman with the proceeds to be split between Fenton and
the government, which eventually sent over $3 million from its share to the U.S.
Treasury after reimbursement for certain costs.

For collectors who can’t afford to bid on the infamous coin,
the upcoming sale may boost the values of other coins in the double eagle series,
which were already rising in the past year because of the increase in the spot price
of gold.

And the government has indicated previously that it has no
plans to ever monetize any other examples of the coin, effectively making the Weitzman
coin unique. It will be available for public viewing by appointment from June 4
to 7.