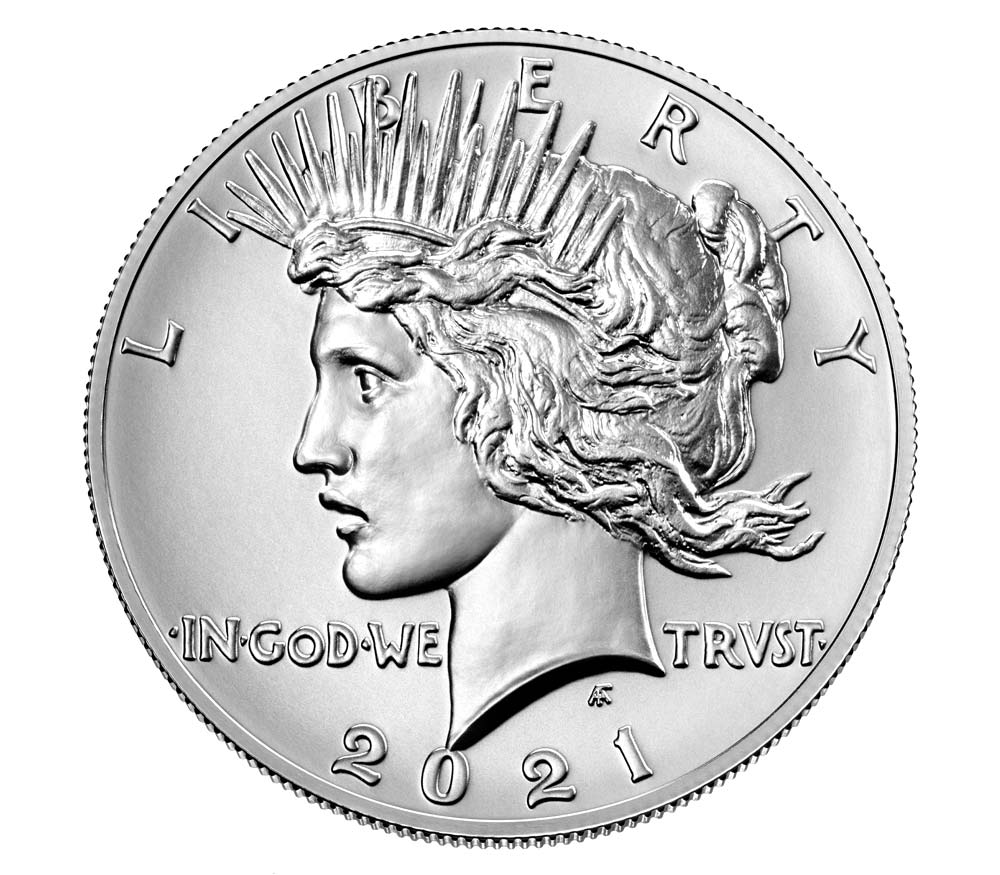 The History of Peace Dollars Is Still Evolving – Bullion Shark

On August 10 the United States Mint offered and sold out in
about 30 minutes the 200,000 2021 Peace dollars being issued to mark the
centennial of the release of the 1921 Peace dollar. The new coins bear the same
design as the original coin and were created using the mint’s legacy assets
such as galvanos and hubs. In fact, thanks to modern minting technology, according to the mint, they
more closely resemble the artistic intent of Italian-American sculptor Anthony
de Francisci who designed the famous coin – one that remains along with the
Morgan dollar the most collected large silver coin of the 20th
century.

This new Peace dollar may be the first of an annual
series of Peace dollars, which is authorized under the legislation that created
them and appears likely given how quickly they sold out. Secondary market values for
the coins began rising immediately this week. Values may rise even higher this
fall after the coins ship from the mint, and buyers see them in hand.

They are not struck with the same level of high relief as the 1921 coins. In addition, they are made using .999 silver planchets, which
is what the mint now uses for all its silver coins. As a result of their higher silver purity than that of the original coins, which were made in
.900 silver, and making them the same diameter of 38.1 millimeters and same
weight of 26.73 grams, they are just slightly thinner than the originals.

Although the difference in thickness should be barely
noticeable, if at all, to the naked eye, that is one of the reasons the 2021
coins could not be struck in full high relief. The slightly reduced thinness of
the new coins means less metal to move to the center where the central design
motifs appear on both sides of these coins. As the Mint explained, “the 1921 high
relief design rose higher than the border, which makes the design elements
susceptible to damage. The relief of the 2021 Peace and Morgan dollars matches
modern commemorative coin specifications.”

Strong interest in the new Peace dollars from collectors has
helped to push values up for the original Peace dollars and not just the one
from 1921 but for the whole series, including common dates and better, scarce
dates. If you have been collecting the original series, you may be surprised by
how well your coins have appreciated, especially during the past couple years
as anticipation for the 2021 coins continued to build.

The Peace dollar is an attractive and affordable series with
just 24 coins to a complete set, and it can be collected in different ways depending
on your budget and interests, i.e., raw or graded, circulated or mint state,
etc.

The always-popular 1921 high relief Peace dollar is a fabulous
one-year type coin that every collector should have whether or not they collect
the series. The coin was designed as a commemorative to mark the end of World
War I and to celebrate the American victory over Imperial Germany. The idea of
issuing the Peace dollar came mainly from the American Numismatic Association
and its former president Farran Zerbe, a famous collector of silver dollars for
whom some special varieties of the coin are named.

The Peace dollar was issued without specific congressional
authorization and was authorized under the provisions of the Pittman Act of
1918 under which 270 million Morgan dollars were melted and converted into
silver bars that were sold to Great Britain to help support the price of
silver, which Germany was seeking to manipulate to hurt Great Britain. In
addition, the law also provided for the coining of up to 270 million new silver
dollars using domestic American silver, beginning with 1921 Morgan dollars.

The Peace dollar was approved late in 1921 by Treasury
Secretary Andrew Mellon and struck in December. It was only released for circulation
the following January. By 1928 the 270 million silver dollars required to be
made under the Pittman Act had been produced, but Congress revived the series
later and more coins were made in 1934 and 1935.

There were extensive production problems with the 1921 coins
because of its high relief, and a die pair could only make at most 25,000 coins
before failing compared to 200,000 for the 1921 Morgan dollars. The Chief Engraver
George Morgan made some modifications, but the problems continued, which led to
the lowering of the relief seen on the 1922 to 1935 coins. But when Morgan was
re-working the 1922 coins to try to make them in high relief, 3,200 experimental
examples were made including matte and satin proofs that are very rare and some
regular coins. Only a handful of those coins have so far surfaced, including just
recently a fifth modified high relief 1922. More are likely still waiting to be
discovered.

In 1964 the Johnson administration once again revived the
program, calling for 45 million new silver dollars that would be used un
casinos in the West. The Mint and Treasury opposed issuing the coins since they
would not circulate, but Senator Mike Mansfield who created the program
insisted they be made. But all 316,076 1964-D Peace dollars that the Mint said
were trial strikes are believed to have been melted. Rumors have swirled in the
coin community ever since of possible examples that still exist, but none have
ever been confirmed. The U.S. government considers any such coins illegal to
own.

There are two dates considered scarce in the series – 1928 and
1934-S. By 1928 the coins authorized under the Pittman Act had already reached
their maximum, so that year only 360,649 coins were made. While the 1928 was
saved and still exists in mint state in good numbers, the 1934-S was not,
making it relatively inexpensive in circulated grades but worth thousands in better
mint state.

Some collectors try to obtain these key date issues first,
while others focus on the rest of the series and get them later. Prices are
rising even more for the better dates today, so you probably want to get them
first. And if your budget is too limited for the original series, there is the 2021
Peace dollar and probably more coins of this type in the coming years.

TSX futures down on weaker bullion prices | The Chronicle Herald

(Reuters) - Futures for Canada's main stock index fell on Tuesday, with the main set to snap its two-day win…