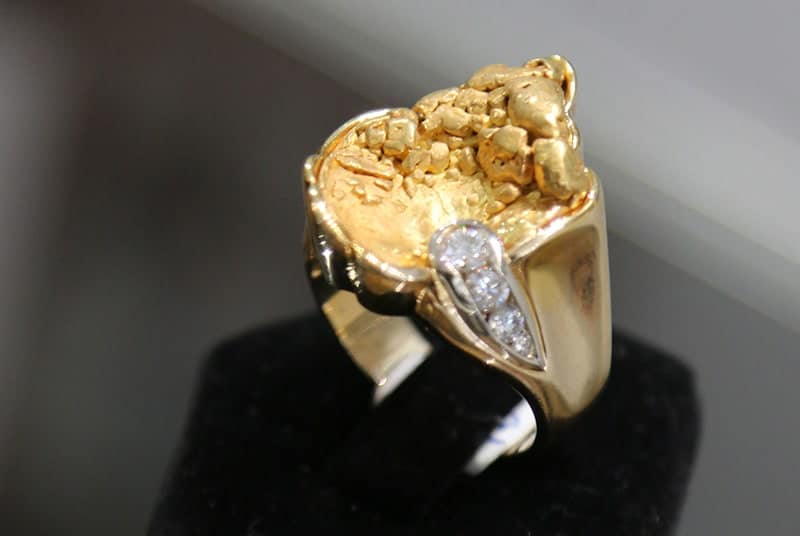 Carl Cox, of Alaskan Gold Connection, has spent the last 25 years living in Fairbanks, Alaska. After Nevada, Alaska is the second most productive gold-producing state in the country. Cox moved there with a jewelry-making background and decided he wanted to get more acquainted with the raw and natural gold specimens as they were mined from the mountains.

Gold is usually processed from “paydirt” through an intensive system of conveyors and water which separates the small flakes from gravel. It is then melted down for processing. But gold will occasionally form into larger nuggets and take on unique forms. However, finding these nuggets is a rare occurrence, and buying raw nuggets requires connections.

Cox spent years in Alaska getting acquainted with over a dozen private mining operations, informing them that he wanted to buy their nuggets to craft into precious jewelry.

Cox explains that, “Specimen value comes from the fact that each nugget is unique in itself, not only because of appearance, but the size. Any gold of any size like this is extremely rare. So the rarity of the piece is what drives the specimen value.”

After he was established in Fairbanks, Cox developed his own system. “When a miner would come into my store, I would get really picky. And when I’m cherry picking the really cool nuggets, the price goes up.”

Cox’s willingness to pay a premium for the rare specimens ensured he could get his hands on the most unique nuggets. Six years ago, Cox decided he wanted to live closer to his Utah grandchildren and was attracted to living in Ogden Valley and working on Ogden’s 25th Street. He maintains all of his mining connections in Alaska through his business partner who still resides in Fairbanks at his old shop. Still, he feels at home in Ogden.

Cox further explains that, “Two Street in Fairbanks looks just like Ogden’s 25th Street. The Farmers Market, the Harvest Festival, the car show. It’s a very good place for business. It brings a lot of people in. It has a lot of exposure. It’s something that you don’t have everywhere. It is full of locally-owned businesses supported by a loyal population who value the independent Western spirit, a mindset that was similar in Alaska in the isolated outpost of Fairbanks.”

Cox was planning on originally opening his doors March 1st, but Covid caused a two-month delay. While he says certainly foot-traffic is down from normal, he has a lot of customers making custom orders, and Cox can, in his words, “make just about anything.” He often makes custom wedding bands and necklaces, earrings and settings with rings with precious stones, most of which feature his unique raw gold nuggets.

Subscribe to Utah Stories weekly newsletter and get our stories straight to your inbox:

No votes so far! Be the first to rate this post.

The perfect gift for yourself or someone special. Material: copper and 18K gold platedBookmark size: 110mm*75 mm Gold…

Stylists more and more often remind us to supplement daily and evening stylizations with jewelry and accessories. An…