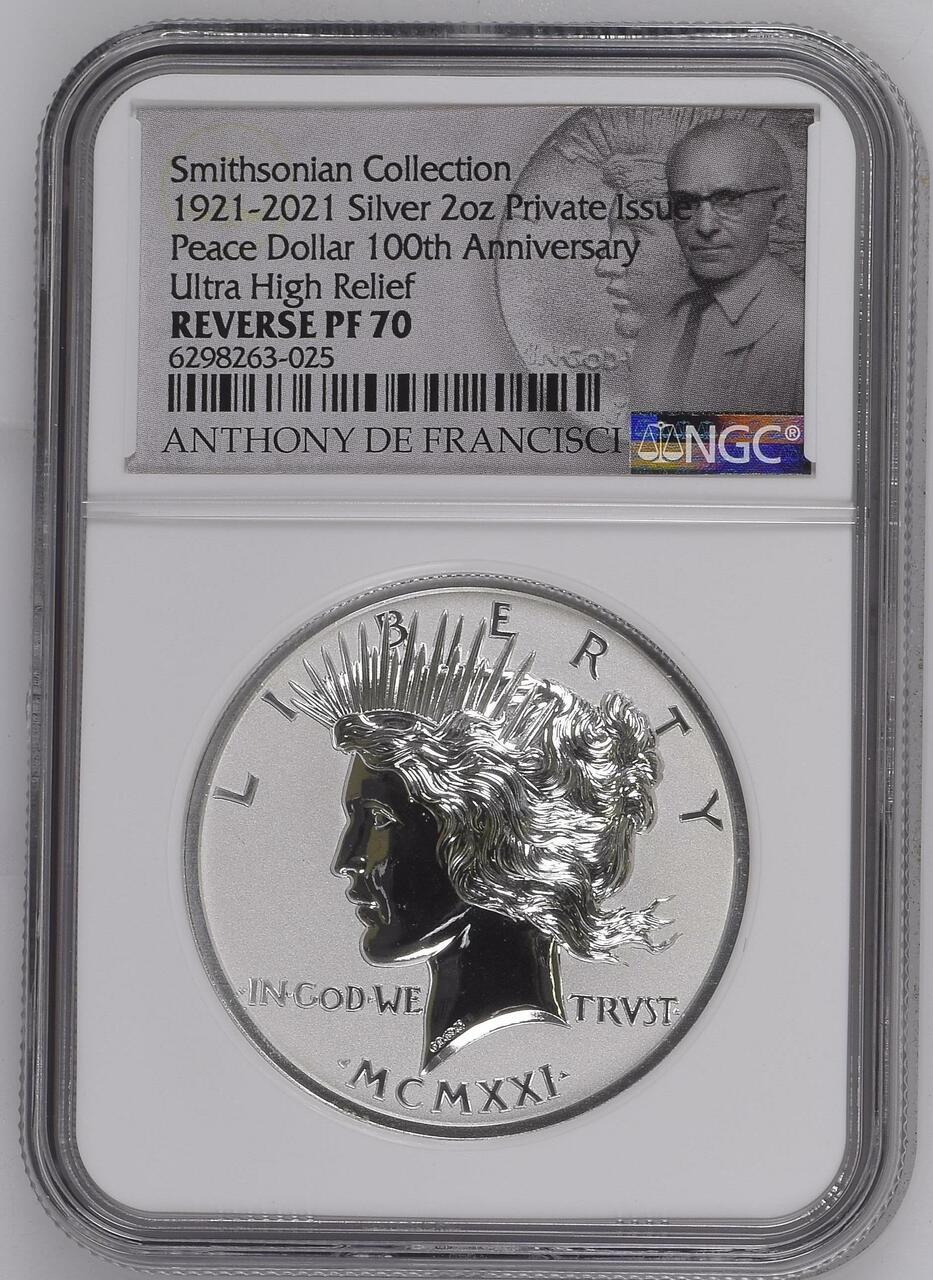 2021 marks the centennial of the debut of one of the most popular
U.S. coins of all time – the Peace silver dollar – which was issued
to commemorate the end of what until then was the worst war in human history
and is now an icon of 20th century coinage that even inspired a modern Canadian
Peace dollar almost 100 years later.

Designed by Italian-born American artist Anthony de Francisci,
the Peace dollar coin has a fascinating backstory. In fact, the actual design used
on the coin from 1921 to 1935 is not the same as the one first struck in late
1921 that was modified and which included a motif used in an alternate reverse
design the artist had prepared along with a slightly different obverse design.

Those original designs that have never been issued as coins
have now been struck in a beautiful two-ounce, .999 silver medal in amazing ultra-high-relief on both sides and a Reverse Proof finish with a mintage limited to 1,921 coins and
which are authorized and approved by the Smithsonian Institution. And they are
available now graded PF70 by NGC.

Origins of the Coin

Back in November 1918 when the armistice ending the fighting
in World War but before the formal end of the war, an article was published in December
of that year in The Numismatist, the official magazine of the American
Numismatic Association, that proposed a victory coin be issued as a silver
dollar.

In 1920, coin dealer and former ANA president Farran Zerbe
developed the idea more fully as a commemorative coin to be sold at face value
to demonstrate America’s commitment to peace. Since the 1918 Pittman Act called
for the resumption of striking silver dollars using silver purchased from
Western American mines, the coin would be a silver dollar instead of a half dollar.
The ANA established a committee for this program, which then lobbied the House
Coinage Committee.

As the ANA worked with Congress to get a bill passed that
had been introduced May 9, one roadblock was that the U.S. had not yet formally
declared peace with Germany, which only happened in a congressional resolution
in the summer of 1921, which meant the coin could not be issued until the new
Harding administration took office. As for the legislation, none was required because once a coin design has been used for at least 25 years as the Morgan dollar had, it can be changed by the Treasury with congressional approval.

The Commission on Fine Arts, which reviewed coin designs and
made recommendations to the Treasury secretary, got involved, and the Treasury decided
to hold a design competition similar to one for the Verdun medal for which de
Francisci had submitted a design.

Although he was younger – only 33 at the time –, thought he
would not win and was much less experienced than the seven other designers who
submitted their designs for the coin that included people like the legendary
Adolph Weinman, Victor D. Brenner and James Earle Fraser with him de Francisci
had worked before, his design was selected.

The specifications for the design simply said they had to be
“representative of peace or limitations of armaments. It also said the obverse
should carry a Liberty head similar to the one on the Morgan dollar “but made
as beautiful and full of character as possible” and the coin should be “decidedly
American in spirit.”

The new coin would be known as the Peace dollar and is the
only American coin to carry that word to this day.

In his submissions, de Francisci decided to submit two
different reverse designs and an obverse design similar to what was later used
on the actual coin but with the date in Roman numerals and “different modelling
of Liberty’s chin and mouth,” making them less prominent, as Roger Burdette has
explained.

As for the two reverses – one was of a benign eagle holding
not olive and oak as on most U.S. coins to symbolize peace through strength but
instead only an olive branch for peace, and a second design featured an aggressive-looking
eagle breaking a sword in its mouth.

The obverse was partly inspired by the statue of Victory by
Augustus Saint-Gaudens on his monument to Civil War General Sherman in New York
City but with his new wife Theresa serving as the model, which became her claim
to fame that was noted in her obituary when she passed in 1990 at 92, while the
artist died in 1964.

He decided to go with the reverse showing an eagle perched
on a mountain top viewing the dawn of peace on the horizon as symbolized by rays
in the background. However, while he opted not to use the different reverse
design he prepared as far as the eagle itself, he did incorporate the broken sword from the other design showing
the eagle clutching that and olive. The broken sword was intended to symbolize
destroying the implement of war, and a model using that version was approved by
President Harding on December 20. A bronze cast was struck.

The sword later became controversial following the
publication of an editorial in The New York Herald on December 21, which
argued it implied defeat and mercy, leading to the sending of numerous letters
to the Treasury protesting the design and was removed by Chief Engraver Charles
Morgan on December 23 with the artist supervising the altering of the die.

Interestingly, the artist’s wife noted in a 1981 New York
Times piece that the judges of the design competition liked both of the
artist’s reverse designs and voted first for the one never used that has now been
recreated on the 2021 silver medal. That decision was rescinded, and the judges
opted for the one with the more passive eagle.

It’s important to keep in mind that all of this happened
very quickly. The call for designs had only gone out in November, giving the
artist little time to do all this and giving the Mint little time to strike the
coins after those modifications were made. When that did happen at the end of
1921, problems were encountered with striking the coins in high-relief, which
is why the 1921 Peace dollar is the one in the series, and the only American silver coin. made in that stunning relief.

Traders: The shortage of the supply of “Swiss bullion” due to the increase in demand and the lack of supply | tellerreport.com

Dealers complain about the decline in its availability in the market and the increase in its prices Traders: The…