Following Monday’s choppy session, the XAU/USD pair gained traction during the Asian trading hours on Tuesday and reached its highest level since early January at $1,916. However, gold struggled to preserve its bullish momentum and dropped all the way to $1,892 before going into a consolidation phase. As of writing, XAU/USD was down 0.2% on the day at $1,903.

US T-bond yields push higher after latest US data

Earlier in the day, the greenback struggled to find demand as a safe haven amid the risk-positive market environment. Nevertheless, the sharp upsurge witnessed in the US Treasury bond yields weighed on gold in the second half of the day. Currently, the 10-year US Treasury bond yield is rising more than 2% on a daily basis at 1.611%.

The data from the US revealed on Tuesday that the business activity in the manufacturing sector continued to expand at an impressive pace in May. The Markit Manufacturing PMI improved to 62.1 from 60.5 in April and the ISM Manufacturing PMI rose to 61.2 from 60.7. The underlying details of these reports revived concerns over inflation and provided a boost to T-bond yields.

There won’t be any high-tier data releases featured in the US economic docket on Wednesday and gold continue to react to fluctuations in US T-bond yields.

Despite Tuesday’s modest decline, the Relative Strength Index (RSI) indicator on the daily chart continues to float above 70, suggesting that gold needs to continue to edge lower in order to correct its overbought reading. However, buyers continue to defend $1,900 (psychological level) and additional losses could be seen if gold manages to make a daily close below that level. The next target on the downside could be seen at $1,870 (static level, ascending line coming from late March).

XAU/USD Analysis:Gold Continues to Shine as Inflation Concerns MountCommodities remain a hot topic in 2021 as the… 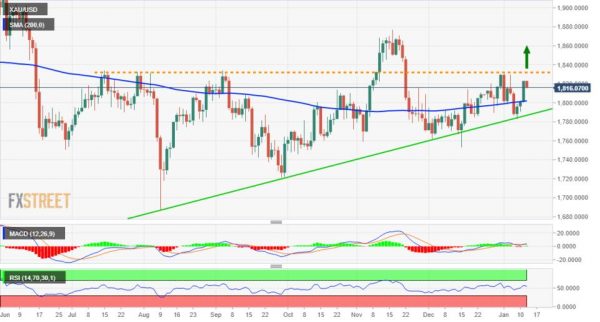