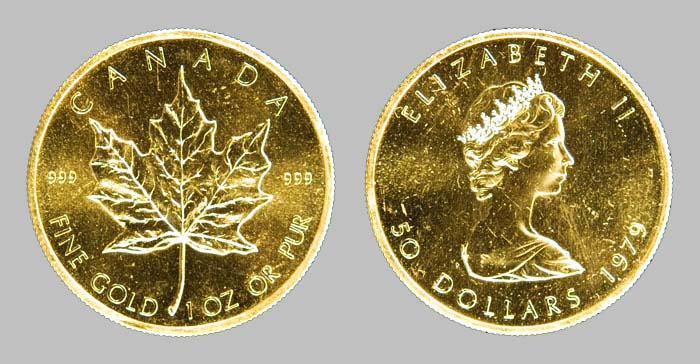 [stextbox id=”info”]Canada’s gold maple leaf coin is one of the purest gold bullion coins in the world, with a purity level of .9999 millesimal fineness, with some special issues of the coin being as pure as .99999. This basically means that the coin contains virtually no base metals at all—only gold, from mines in Canada only, per legislative mandate.[/stextbox]

Designated as an “international symbol of purity” by the Canadian government, the Canadian Gold Maple Leaf bullion was originally introduced into world markets in 1979. It is the second-oldest gold bullion series – only the South African Krugerrand was availabler earlier. Due to conflict in South Africa associated with the apartheid at that time, there was a great shortage of pure gold bullion worldwide. This created a “golden” opportunity for Canadian Maple Leaf coins.

The first Gold Maple Leaf coins held a gold purity of 999 parts per 1,000 (.999 fineness), qualifying for 24-karat designation. Beginning in 1982 all Gold Maple Leaf coins were improved to .9999 fineness. The Royal Canadian Mint became the first national mint in the world to produce .9999 gold coins for commercial use. There are special issues of the coins available in .99999 fineness and containing virtually no base metals, making them as pure gold as any coins ever produced.

In 2007, the Canadian government made waves among investors and coin collectors by announcing the release of their $1 million Gold Maple Leaf coin. While the face value of the coin was listed at $1 million, the actual gold content was valued at more than double that figure. The artist Stanley Witten was charged with the design of these special Gold Maple Leaf coins, which were minted at .99999 fineness.

The front (“obverse”) of the coin presents the image of Queen Elizabeth II. The image is a profile of the British monarch, wearing a pearl necklace and earring. The year of issue and the face value are listed underneath the profile, while the name ELIZABETH II stretches across the top boundary. The design was created by Walter Ott.

The initial Canadian Gold Maple Leaf showed a younger Queen Elizabeth II, however the design was changed in 1990 to show a more mature version.

The rear (“reverse”) side contains one of the most recognizable images in the world of bullion, as well as the official national symbol of Canada: the Maple Leaf. The name CANADA lines the top of the reverse, and the numbers 9999 appear on both sides of the Leaf. Below, the words FINE GOLD and the weight denomination (1 OZ OR PUR, for example) are featured.

In 2013, the Royal Canadian Mint added increased texturing and detail to the Maple Leaf on the reverse as an additional safety feature. They also added a small image of a Maple Leaf that has been “microengraved” underneath the larger Maple Leaf.

While offered in 7 different weight denominations throughout its history (including the $1 million special issue), the Canadian Gold Maple Leaf is most frequently traded in 1 oz, 1/2 oz, 1/4 oz, 1/10 oz and 1/20 oz denominations. All weights are in troy ounces.

The .9999 fineness of Canadian Gold Maple Leaf coins increases their value; however, there have been some complaints about any coins struck with so little base metals. Gold is an incredibly malleable substance and, if not packaged and delivered correctly, a pure-gold coin is likely to show signs of handling and wear.

Gold Maple Leaf coins are considered legal tender in the country of Canada. While the face value listed on each weight denomination lists the coin’s transactional value, bullion coins are almost never used for transactional purposes. This is because the face value is typically much smaller than the intrinsic value of the coin, or the market value of the coin as a commodity.

The market price of a Canadian Gold Maple Leaf is largely determined by the current market price of gold (GLD). This price is used to determine value inside of an investment portfolio. Since gold prices fluctuate daily, the value of Canadian Gold Maple Leaf bullion investments will also fluctuate daily. Most major newspapers report the daily price of gold, making the value simple to monitor.

Investing in Canadian Gold Maple Leaf Coins Through an IRA

All official Canadian Gold Maple Leaf coins meet the minimum purity requirements set by the IRS. For IRA investing, the owner of the account must make an initial bullion purchase of at least $5,000 in order to establish a precious metals IRA. All subsequent purchases must be of at least $1,000.

When an investor makes a purchase of Gold Maple Leaf coins (or any investment-grade bullion), the IRS further requires that all coins and/or bars be held in a qualifying “depository.” The depository is responsible for the security and maintenance of the metal.

Those with an existing IRA have the option of transferring or rolling over funds into a precious metals IRA.

Canadian Gold Maple Leaf coins are available for direct purchase from the Royal Canadian Mint. They can also be bought through various coin dealers around the world, such as the American Precious Metals Index (APMEX).

How To Move 401k To Gold IRA Without Penalty – Discover New Insights.. – Millionsmarchharlem

A 401k plan is typically provided via your employer. It will be possible to create a participation to your strategy out…

Retirement is a concern that most Americans concern yourself with as a result of volatile state of the economy. If…